The way the LS MS team sees last Saturday is “We came, we saw, and we got a great ice cream on the way home”.

The way Priya sees it of course is slightly different, she came, she played center forward, and she stuck the winner in the back of the net!

Either version works just fine as our 11 intrepid explorers, plus guest goalie, parents and senior management (that’s Una) finished out the first ever Lone Star season with a credible victory and a bigger and tougher opponent and did so without even one sub on the bench until Emma turned up at half time. They did so without the boys, who were all off doing their nails, or some such but with the welcome addition of Maya and Justine and a second appearance from Kate who for once did not have to travel.

The first 10 minutes were not pretty, to be fair. Davy Crockett and pals at the Alamo know what i am talking about, but then following a bust up with the umpires over goggles, an enraged Lone Star found its footing and the afore mentioned Priya found the back of the net. Halftime came and the cry from the stands was ‘win this one and there’s ice cream on the way home” and a truly galvanized team led by Casey charging up and down the right wing took the game to St Mary’s Hall and were indeed unfortunate not to add a second or even third goal to their tally.

Despite that disappointment, victory was secured and a fruitful unbeaten first season sees three wins and two draws logged into the record books which is an amazing performance for a team of mostly beginners. 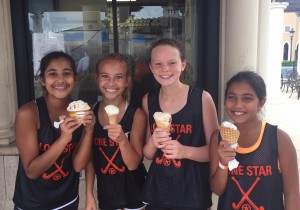